Despite promise after promise, and despite the "thumbs up" from the UK Ambassador to Zimbabwe [funny - who is being transferred to Nigeria in November!], Zimbawe's 'highly suspect' Electoral Process is full of gaping 'holes' - even though the apologists keep claiming that it will be Free, Fair and Credible!

Take this survey from www.sivioinstitute.org
"Confidence with the Electoral Process" [Full results HERE]

Figure 5 Confidence with the Electoral Process


The majority 68.3% do not trust the Zimbabwe Electoral Commission, the agency responsible for running elections and there are some (56.79%) who feel there was need to carry out all outstanding electoral reforms before holding elections.


SO let's recap: 72.46% of the respondents are not convinced that the Elections will be Free and Fair.

AND 68.3% do not trust the ZEC - the body organising the Election Process.

But let's not just listen to a survey shall we? What about 'Electoral Resource Centre' director Tawanda Chimhini, Concerning the Press Conference held on Monday 18th June by the ZEC Chair: >

Addressing journalists in Harare, ZEC chairperson, Priscilla Chigumba, said political parties had "no choice, but to participate in the July 30 polls and raise their complaints later as the election date cannot be changed."

Tawanda Chimhini said: “For lack of a better word, it is very tragic. If ZEC is preparing for an election, it should prepare for a free and fair election, not one that will be challenged.

“Refusing to share details on the voters’ roll, refusing inspection of the voters’ roll so that people can give feedback is an admission that ZEC does not want any form of oversight and accountability. It shows the election commission is not ready and serious about running national elections.

Chimhini added: “How can they prepare to go for an election that will be contested? What is the rush? What type of an election are they preparing to run?
“We went to court and obtained a court order for them to release the voters’ roll used for inspection, but ZEC has defied a court order because it wants to run an election without accountability.

“An election should not be an election for the sake of an election. The dispute surrounding the 2013 polls was pertaining to the voters’ roll and we are repeating the same mistake. If they can tell us today that this is the final voters’ roll without having been inspected; then they can as well tell us that this would be the final results and we have nothing to do about it.”

Well there you have it - an election that is acknowledged to be highly suspect and with many flaws - by the population, the opposition and the Zimbabwe Electoral Commission itself!

Added to that are the overt media bias from TV and Newspapers in Zimbabwe - who only write negative articles about any opposition to the ruling party [ they see themselves as RULERS as opposed to LEADERS - which in itself tells a story.]

Furthermore, the skewed Ward system which gives undue electoral advantage to the sparsely populated rural areas - the peoples of whom, are in turn the 'victims' of the ruling party's intimidation tactics - to induce voting for the ruling party. This intimidation is carried out by so called 'Zanu PF "Youths"' [ages up to 55!] and the Army - which the ruling party seems to bestow far too much due deference to - in fact some say that the Military are in fact in control. 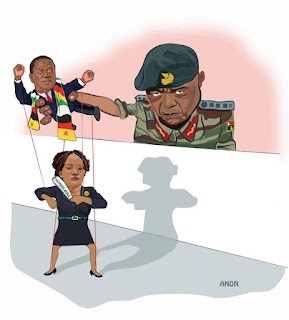 This highly irreverent cartoon shows the [retired] Army General - (now Zimbabwe's Vice President), working Mnangagwa (Now President, after a de facto coup d'état in November 2017 and Mugabe's right hand hench  man for 37 years) who in turn is pulling the strings of the ZEC [Zimbabwe Electoral Commission] Chairwoman - about whom we have been discussing above.

The likenesses are surprisingly very accurate!

At the end of the day the Elections in Zimbabwe will be a sham, but who will do anything about it?
As in 2008 there was a de faco coup d'état, and in 2013, the Elections could not be classified as Free and Fair.

So in effect we have AN ILLEGAL [MILITARY] DICTATORSHIP, with a so called "ruling party" not democratically elected, calling the shots to re-elect itself.

Well that will be free, Fair and Credible then - won't it?

TRAGIC - is the word, as stated above.

Posted by ZHRO HR Charity at 12:23 No comments: