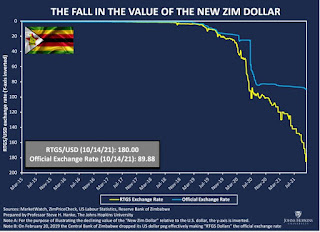 Mnangagwa ‘Totally Ignorant’ On Economic Matters – Steve Hanke Steve Hanke is a professor of applied economics at The Johns Hopkins University and senior fellow at the Cato Institute.

He is a columnist at Forbes and a regular contributor to The Wall Street Journal. Over four decades Hanke has advised dozens of world leaders from Ronald Reagan to Indonesia’s Suharto on currency reforms, infrastructure development, privatization, and how to tame hyperinflation. You can follow him on twitter @steve_hanke.

United States (US) economist, Steve Hanke, says President Emmerson Mnangagwa is not only corrupt but "totally ignorant" when it comes to economic issues. In a tweet, Hanke said the Zimbabwe dollar has depreciated by 93% against the United States dollar since the local currency was reintroduced in 2019.

He said: Corrupt @edmnangagwa brought back the Zimbabwean dollar 2yrs ago. Since then, the Zim dollar has depreciated by 93% against the mighty USD. President Ed is not only corrupt but, when it comes to economics, he is totally ignorant. https://twitter.com/steve_hanke/status/1448578071888494595?s=20

This comes as the forex rate has plummeted on the black market, with the currency changing hands for up to Z$200 per US dollar, while the official rate is pegged at Z$90.

Meanwhile, the Confederation of Zimbabwe Industries (CZI) – the largest representative body for local business, has warned that the country’s currency is in danger of collapsing as businesses resort to United States dollar transactions. In a tweet on Tuesday, Hanke said threats by the Zimbabwean government to suspend businesses using black market rates will end in tears.

He wrote: " Zimbabwe's currency is in a death spiral. Now, the corrupt government is threatening to suspend all businesses using black-market exchange rates to price goods. I’ve seen this movie before. It has a tragic ending".

Authorities have in recent weeks arrested scores of foreign traders accused of manipulating the volatile Zimbabwean dollar by trading on the black market. But in a letter to its members, CZI said it had cautioned the government against clamping down on firms and traders. It said: The greatest risk facing the economy right now is an inappropriate policy response to the rising parallel market premium. Clamping down on informal exchange trading in the absence of a viable formal market will have catastrophic consequences for the economy.

https://www.occrp.org/en/investigations/how-a-zimbabwe-tycoon-made-a-fortune-from-a-trafigura-partnership-and-spiralling-national-debt Kudakwashe Tagwirei, who is close to Zimbabwe’s president and his inner circle, leveraged his privileged access to fuel and mining markets to strike a lucrative partnership with commodities giant Trafigura. Sanctioned by the U.S. and U.K. for corruption, Tagwirei continued to do business by relocating his network to Mauritius.

He is still active in mining and fuel deals in Zimbabwe. Government officials appear on key company records and Tagwirei’s own correspondence, indicating that there might be more powerful people behind the network

The payments made to Tagwirei raise a red flag, according to Global Witness’s Natasha White. “Red flags include the personal involvement of politically exposed individuals in such deals. It would be extremely concerning if payments have been made into a personal account of Tagwirei by Trafigura, whether or not he was sanctioned at the time,” she said.

Yet Mnangagwa has been invited to Glasgow in the Unitid Kingdom to the COP26 Climate Conference! Totally unwarranted, wholly inappropriate and we conside it to be an error of judgement by the naive Brits!

This article explains the insensitive invitation and links to both an online petition to oppose Ed's visit and the physical petition hand over to Boris Johnson on the 21st October 2021, the UK Prime Minister to block Mnangagwa and his 70 strong "team" of hangers-on and "security staff" LOL

Posted by ZHRO HR Charity at 10:49 No comments: