Zimbabwe is Ruled by a Military Junta

Over a week ago, Kembo Mohadi was talking out of his handkerchief again,  saying all manner of mad things at some Zanu PF event in Beitbridge.

For those who don’t know, Kembo Mohadi is one of the 2 Vice Presidents - the one who sprung from nowhere. He was also part of that thicket of old Zanu PF big men who went on that pilgrimage in Chinhoyi expecting diesel to come out a granite rock.

Anyway, a week and a bit ago, Mohadi was at some grand opening of so called 'homes for civil servants' in Beitbridge. The whole thing  is apparently part of some vision 2030 lie about infrastructure. As if all those Zanu PF old men are will be around in 10 years time.

Anyway, at this Zanu PF jaunt, Mohadi bragged about the military's stranglehold on Zimbabwe. He also implied that the suspect in the White City bombing was incapacitated to say the least. He said the person had been 'dealt with' and would not be doing such a thing again. The suspect was never tried, and based on Mohadi’s tongue in cheek comments, the person is most likely deceased.

This is the sort of language used by a man who is trying to impress his masters and the hired audience (sometimes forced). Everyone knows that Kembo Mohadi is as pointless as an ashtray on a bicycle! So to gain some notice he is getting into the habit of trying to look important and tough. But does he not know that what he says confirms that Zimbabwe is ruled by a Military Junta?

Does he not realise that saying things like ‘the army are the best placed people to manage the economy’ is the sort of thing that puts off foreign investors? The man is one of the many reasons why Zanu PF needs to go. We are being ruled by old men who really should be in retirement, playing with their great grand children.

Posted by ZHRO HR Charity at 23:37 No comments: 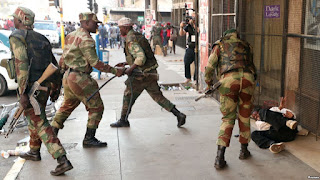 Human rights are important because they protect the weak from the more powerful. In most countries, especially those in Africa, Government have tremendous power over the public because they make policy, control funding and make the rules and laws which people are expected to abide by. As such, a Government that is out of control can use it’s power to do horrible things to the masses. This is exactly what is happening in Zimbabwe – the tyranny of a "Government".

As most people will know Zanu PF is the political party that has been ruling Zimbabwe since the country got its independence in 1980. Zanu PF have been abusing this power everytime anyone or any group of people questions the actions of the junta [a more appropriate description than Government] including its legitimacy. They also abuse this power by their shameless corruptions that trickles down from the President's Office down to Government Officials, police, military and courts. This corruption is what is depriving millions of Zimbabweans of basic things like water, food, security, decent health and public services.

When Emmerson Mnangagwa declared himself President after removing Mugabe in a military coup, he promised a lot of 'positive' things for the country. Some people believed him including highly respected intellectuals from around the world. However, those who know the man's history knew Zimbabwe was going to go even more backwards in terms of human rights abuses. I think people should have refused to endorse the military coup because it was an illegal act, treason in fact.

Ever since he became president, Mnangagwa has presided over some of the most shameless human rights abuses of the Zimbabwean people particularly those who oppose his illegitimate rule of the country. Everytime the MDC Alliance or any group of people want to express their grievances, the Zanu PF 'junta' arrests them. Not only that, the regime sends state agents to abduct political activists, the military to go into the ghettos to beat up and shoot innocent people including raping women. All this is done to inflict fear in people. This Zanu PF regime really does not recognise the human rights of the Zimbabwe public. The right to free assembly, freedom of expression, democracy, right to life, right to basic needs, right to have a private life; all these human rights are habitually abused by this government. They do not recognise the Zimbabwean people as free individuals, to them, it appears that the public are like an inconvenience the regime has to deal with. It’s a dreadful situation. Zanu PF like to claim that they freed Zimbabweans from the Rhodesians, but it’s clear now that they only freed themselves.

Posted by ZHRO HR Charity at 19:56 No comments:

A Reminder that Zimbabwe is NOT a Democracy 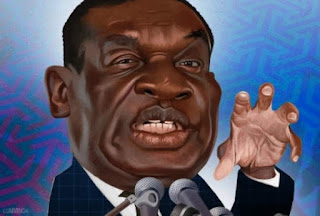 Zimbabwe has a "democratic constitution" but beyond that document nothing resembles any form of democracy. The country is ruled by Zanu PF which has absolute control of the State Structures including the Police, Military, Courts, Electoral Commission, the Media and the country's Central Bank. Therefore, when it comes to the issue of who rules Zimbabwe, these structures always take a position that favours Zanu PF against opposition parties.

Democracy is important in that it gives people influence on the issues which affect their lives such as choosing the country's president. Democracy also brings accountability, whereby politicians have to justify their decisions to the electorate are asked important and difficult questions by a free media about their policies and practices.

In Zimbabwe none of that happens. The President, 'Government Ministers' and their friends are not asked questions about why they do what they do because the national broadcaster, the ZBC is under complete control of Zanu PF. This is why Zanu PF get away with murder, literally -  they don’t have to account for their actions to anyone, not the Courts and not the Media, and definitely not the public.

Posted by ZHRO HR Charity at 16:19 No comments:

What Law in Zimbabwe?

The Law [Courts] in Zimbabwe only protect the Zanu PF 'political party', at the people's expense. We need to realise this before wasting time pursuing justice in those Courts.

I will admit that I am not a lawyer, but it doesn’t take much education about the Zimbabwean judiciary to see that the way the law is applied always favours Zanu PF and not the people. What I mean is, whenever there is a situation whereby a judge has to decide to make a ruling between favouring Zanu PF or the people of Zimbabwe, the judge will always favour Zanu PF particularly the wishes of the junta/politburo that controls the presidency.

We have seen so many examples of this captured judiciary since 1980. Recent examples are the 2017 coup which removed Mugabe. The removal of a sitting president by military force is illegal, but in 2017, the Zimbabwean courts ruled that the 'coup' was legal. How crazy is that? After the 2018 election was clearly rigged, a bunch of Judges ruled that the election was free and fair, surprise, surprise!

Every single week we see the Zimbabwean Junta inflicting violence and repression on dissenting voices. They get away with it because the law 'favours' them. I have heard some people say Zimbabwe has one of the best constitutions in the world, well, in theory that maybe true, but in reality the laws of a country can only be judged by how they are applied by the authorities, particularly when the authorities are pitted against the general population i.e when the strong are pitted against the weak. And if the strong are always winning against the weak, then it’s safe to say Zimbabwe is run by the laws of the jungle.  This will never change until the military dictatorship [hence the term Junta is appropriate] is gone. So long as the Judges and the courts favour Zanu PF, the constitution is not worth the paper it’s printed on, and Zimbabweans will never be free.

Posted by ZHRO HR Charity at 15:19 No comments: