"The Gukurahundi genocide must not be addressed by the National Peace and Reconciliation Commission Bill (NPRC) as it will open old wounds", Zanu PF lawmakers have said.


Zanu PF Bindura South legislator Remigious Matangira told the National Assembly on Tuesday during the NPRC Bill debate that the proposed legislation made the nation remember an unpleasant massacre. 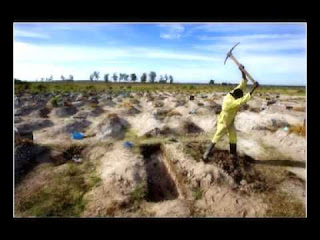 “You now want to open old wounds that had healed. If a husband and wife fought last week, would they continuously be revisiting the reason for the conflict? Would there be peace in that particular home? Let us be nation builders,” he said.


Zanu PF Buhera South legislator Joseph Chinotimba said: “The issue that we are trying to talk about is to open old wounds that had healed.”


The Gukurahundi massacres saw up to 20 000 villagers and opponents of President Robert Mugabe killed in the mid-1980s, with the deployment meant to crush rebellion by ex-Zapu guerrillas.

Memories of the killings, carried out by Mugabe’s North Korean-trained Fifth Brigade in the south of the country, are strong among many in Zimbabwe’s Ndebele ethnic group and contribute to their distrust of the Mugabe-led government. Most of those killed were Ndebele.

Mugabe and Zapu’s Joshua Nkomo signed a unity accord in 1987, leading to the integration of PF-Zapu and Zanu PF.

Mugabe offered a partial apology for the killings in 1999, saying they were “a moment of madness”.

“You cannot have a Truth and Reconciliation Commission 17 years past the conflict.  What are we trying to achieve here? I am at pains to accept this Bill because if you look at countries that have no peace and have disturbances, it is because of these issues that we are trying to bring into existence.  These are issues to do with tribes, ethnicity and so forth.

“I think that it is not good for our democracy and our country.”


MDC Mkoba house of assembly representative Amos Chibaya said there was a demon that was making people reject the Bill.

“The people of Zimbabwe were very clear that they need a Peace and Reconciliation Commission.


“It is disappointing honourable Speaker that as MPs who represent the same people, we are going against this.


“This Bill seeks to align our legislation with the provisions of the new Constitution and I do not see anything wrong with it.  I am seeing a demon in this House. I do not see the reason why.” Chibaya was called to order by Speaker Jacob Mudenda who said there were no demons in the august House.


“Let me just take you to Section 252 (b) under the functions of the NPRC;  it says ‘to develop and implement programmes to promote national healing, unity and cohesion in Zimbabwe in the peaceful resolution of disputes’.”


MDC legislator for Mutasa Central Trevor Saruwaka said MPs must be reminded that the Bill was coming as a result of a constitutional provision.

“It is not for us today to then say we must strike it off and not establish this Commission,” Saruwaka said.


“It is also instructive that those responsible for perpetrating violence and pain among the Zimbabweans will probably be happy if we are to stop this process and let by-gones be by-gones but in reality, the nation does not heal that way.

“We must be able to face our demons if we want this country to progress. It is very easy for a perpetrator to expect the victim to forgive and forget but if you reverse the processes, you will realise that a victim can only be healed when truth and justice has been done.” Daily News