Zimbabwean Human Rights Organisation [ZHRO] Members joined other Zimbabweans in the Diaspora to take part in a peaceful planned demonstration at the Zimbabwean Embassy, at 429, The Strand, London on Friday 31st July 2020. Taking a stand against Looting, Corruption, Government brutality and the appalling living conditions which the ordinary Zimbabwean is made to endure on a daily basis.

An attempt for a peaceful protest was thwarted as most cities were under military surveillance, arresting brave government critics, which took most citizens down memory lane to the Mugabe era and August 2018 army shootings. 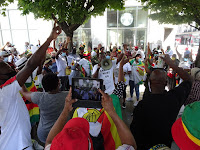 Although the citizen’s voices had been silenced by a tyranny in the capital of Harare, the diaspora stood in solidarity with brothers and sister in Zimbabwe, as people gathered in different locations globally. In Namibia a group of marched to the Zimbabwe High Commission in Windhoek.

The planning of the London demonstration was by the grassroots and the setting up of banners was a collective effort by ZHRO and Vuka group. These two human rights organisations have played a pivotal role in the fight for human rights for Zimbabweans. The Zimbabwean Embassy in London is not a new site for such protests organised by the two Human rights groups. Fighting against injustice in the Mugabe era and three years down the line in Under Mnangagwa’s Regime.

Mr Mnangagwa took power on the premise of change from the old way of governing. The political landscape in Zimbabwe has a taken a sharp U-turn into the old Authoritarian and repressive rule under Mnangagwa’s rule. Looting of the country’s resources which was put to light by Mr Magayisa and Mr Hopewell Chin’ono, Corruption which has not been stamped out as we still see the upper echelon of the political group walking scot free, economically the situation in the country plummeting and unemployment which is rampant. Citizens hoped to hold mass rallies throughout country on Friday, in response to the mismanagement of the country.
The Zimbabwean Police and Army deployed personnel into major cities to clamp down such protesters. Those who managed to gather were detained and kept in Police custody, the like of Tsitsi Dangarembwa and Fadzai Mahere. 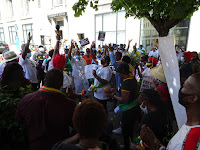 “The Mugabe era was characterised by Human rights violation; the new dispensation has gone from bad to worse “Said Sindiso Ncube. “With the way the country is being governed Citizens are afraid to protest, which should be everyone’s constitutional right, because the soldiers are not hesitant to shoot unarmed protestors on the street.