I have been wondering all along how Zanu PF came to buy into the UNDP’s idea of a biometric voter registration system. I got my answers recently through further reading on the topic. Prior to my desktop research, Zanu PF’s acceptance of the proposal by UNDP and their spirited effort to fund it on their own was so un-Zanu PF.

It still is so un-Zanu PF. It is so uncharacteristic of Zanu PF!

This brings me to the master question. Why now? You and I are both in for a huge surprise. It is so uncharacteristic of Zanu PF to pioneer such changes if they do not in any way bring immediate benefits. If you recall so well BVR was so topical towards the 2013 elections with many opposition MPs lobbying for it. Notable figures who lobbied for it are Tongai Matutu, Pishai Muchauraya, Nelson Chamisa, and many other progressive like-minded politicians. The idea, despite its worthiness, never saw the light of day. There is no doubt that Zimbabwe needs BVR for it to assure its policy of transparency of its political system. 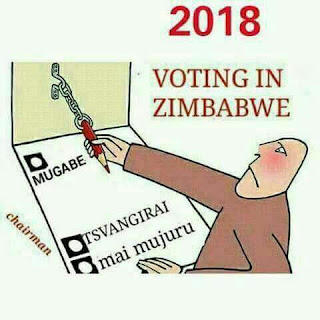 The BVR system will require to be deployed over a period of time. Certain antecedents have to be met before the BVR can be deployed. Key of which are the training of both personnel and the policy for it to be a success. I concur with T.E. Mwanyisa, Biometric voter registration: A case for Zim towards 2018 (Zimbabwe Independent: 12 February 2017) that “ZEC has to take into account capacity building. It is essential to design a system that falls within the skills set of the country. Almost all of Africa is buying skills; skills transfer is low and lost from election to election”.  As I write we are left with less than 13 months to polls and no awareness campaigns have yet kicked off. ZEC is silent on progress or challenges being faced thus far. I would like to think that this is no coincidence at all. It is all part of a master smoke screen. To lull all dissenting voices into thinking we are all on track whilst the Zanu PF machinery does what it does best; threatening innocent villagers into thinking that they are able to know who they voted for.

Our political systems have done little to instil any confidence in the electoral process. As such it has bred an extensive culture of voter apathy. Zanu PF knows this and will capitalize on it. I have asked a couple of my friends back home on what they know so far about BVR. Save for a few articles in state run papers and independent papers no one knows what is going on in the works. I am not one to moot conspiracy theories but mark my words. We are in for a grand surprise come July 2018. Villagers will all vote for Zanu PF not because they want to, but because they have been told Zanu PF will know who they voted for. It has happened before and it is not so far below what Zanu PF can do. People have been coerced to attend rallies and bussed to venues or risk being evicted from their homes or lose limbs before. The propaganda machinery in the form of Green bombers has been resuscitated. This time around they are being dished residential stands for their efforts to thwart any and all opposition ambitions.

I don’t profess to know so much about planning. Given the limited time we have towards polls the I would have thought that by now the voter register should have been in the works and that a massive awareness campaign should have reached all four corners of Zimbabwe. We should all be asking ourselves questions on what information is filtering to the ordinary man on the street or village of Zimbabwe. My informed opinion is that BVR will be used as a smoke screen to rig the 2018 elections.

Where is the information?