The massive exodus of Zimbabweans from their mother land to other countries far and near was as a result of the ZANU PF regime breaching the main components of the Human Rights Act and the 4th chapter of the constitution, part 2 of the declaration of rights.

These include;
"The Rights to life,
The Rights to freedom from torture or cruel, inhuman or degrading treatment,
Freedom to demonstrate or petition" etc. 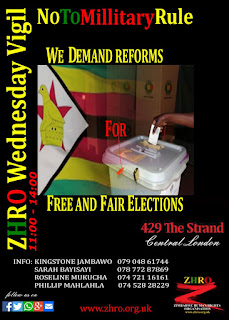 This is evidenced by the number of people who died of men made poverty, the general public and activists who disappeared. Some died for exercising their rights to freedom of choice, expression and their rights to vote freely and without fear.

The rights to life  were not guaranteed to many Zimbabweans, over 4 million Zimbabweans fled the country and are living abroad. During this very long and winding period of collapsed economic and political conditions, the Zimbabweans abroad rescued the Zimbabwean economy by regularly sending money, medical equipment, medicine, vehicles, clothing and food groceries to their families and friends. The diaspora played a very important role and even now, the diaspora are the bread winners of many families who remained home.

For 2 decades many Zimbabweans fled the country to seek refugee in other countries for different reasons and most may not be in a position to travel home, also the diaspora sustained the economy of Zimbabwe during this period. Due to the reasons above and many others, Zimbabweans abroad have been crying out and seeking to influence the government to allow the diaspora to vote from where they are currently based and be part of the decisions made for their mother land. Surprising enough, the government don't seem to welcome the idea and yet they are happy to receive every form of support from the diaspora.

Most democratic countries allow their citizens abroad to vote from the countries where they now live. So, with Zimbabwe is it about asking the diaspora to give and to support in all aspects of life and yet the government does not acknowledge and does not want to give anything back to its citizens? Where is democracy my country? Why are you breaching the Human Rights laws - the citizen's rights to vote? Why are you choosing to ignore the Section 67 (3) of the constitution which states that "Every Zimbabwean citizen who is of or over eighteen years of age has the right to:
a) - Vote in all elections and referendums to which this constitution or any other law applies, and to do so in secret; and
b) - Stand for public office and, if elected to hold such office".

The above request by the diaspora to be allowed to vote from abroad, especially after having a major player in sustaining the economy for almost 2 decades is a clear test to the restoration of Human Rights and a Free, Fair and Credible elections in Zimbabwe.
Posted by Gibbo at 02:12