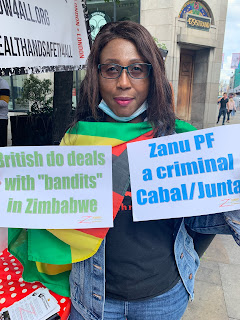 Thank you for allowing the main groups who arranged the perfectly legal protest outside the Zimbabwean Embassy on the 4th August 2021 to garner more publicity regarding our concerns.

Therefore, let us begin by saying you are clearly not aware of the reasons why Zimbabweans were demonstrating, or you are pretending to be unaware in order to create a false narrative against the MDCA, ZAPU and the ROHR, ZHRO Human Rights pressure groups in the UK. Whatever the number of people that are attending a demonstration they must be heard whether one or a thousand. So stating the number of people demonstrating is not the issue.

One of our reasons was about the planned removals and deportations of a ‘target’ [set by the British Embassy in Harare – and we presume Zanu PF] of 100 Zimbabweans per month. The reasons for a [tiny minority] of deportations were for high level criminal offences. However, on further detailed analysis it was noted that the ‘forced-removals’ were [mainly] for visa related issues and the consequences of the UK’s complex, convoluted and expensive asylum processes.

The groups that demonstrated on the 4th of August were very clear on their stance which is that everyone should be given due process. Yes murderers, rapists and child molesters should be prosecuted to the full extent of the law. We were not defending their crimes.

Zimbabwe remains an unsafe destination due to the ruling Zanu PF cabal, and all the ‘captured’ state institutions, such as the Army, Police, Electoral commission and the Judiciary to name but a few. The Zanu PF party has a “psychosis” in that it needs to have all Zimbabweans swear allegiance to the ‘Party’ – but if you cannot, then your life, property etc are at considerable risk of harm, injury, torture, rape, etc [see reports from the US Embassy in Harare, and Amnesty International.]

“Significant human rights issues included: unlawful or arbitrary killings of civilians by security forces; torture and arbitrary detention by security forces; cases of cruel, inhuman, or degrading treatment or punishment; harsh and life-threatening prison conditions; political prisoners or detainees; arbitrary or unlawful interference with privacy; serious problems with the independence of the judiciary; serious government restrictions on free expression, press, and the internet, including violence, threats of violence, or unjustified arrests or prosecutions against journalists, censorship, site blocking, and the existence of criminal libel laws; substantial interference with the rights of peaceful assembly and freedom of association; restrictions on freedom of movement; restrictions on political participation; widespread acts of corruption; lack of investigation of and accountability for violence against women; crimes involving violence or threats of violence targeting women and girls, and the existence of laws criminalizing consensual same-sex sexual conduct between adults, although not enforced.”

“Impunity remained a problem. The government took very few steps to identify or investigate officials who committed human rights abuses, and there were no reported arrests or prosecutions of such persons.”

“The authorities used COVID-19 regulations to justify severe restrictions on the rights to freedom of expression and peaceful assembly. They deployed security forces to abduct, assault and torture perceived critics, and opposition members and leaders. Police and security agents killed at least 10 people. Women were denied access to essential maternal health care, and violence against women and girls was widespread.”

“A joint team comprised of agents of the police, military, the Central Intelligence Organisation, and the Office of the President, known as the “Ferret Team”, terrorized government critics, opposition leaders and activists, and their family members. Many, including several members of the main opposition party, Movement for Democratic Change-Alliance (MDC-A), were abducted from police custody, tortured and dumped far from their homes.”

However, Dr Mavaza ignores the obvious failings of Zanu PF and the subsequent inhumane conditions that have been created as the reasons of the demonstrations. Akin to Mnangagwa as it appears, he too has a very selective memory.

Of course to the learned doctor, places like the leaking sewage in Mbare are not important to him as he has never set foot there as he is dipping his hands into the bottomless Zanu PF’s pocket which never reaches to the masses but is a privilege of the select few like himself. The fact that Zanu PF is so corrupt that a nurse earns £35 a month while the mineral wealth is being looted to fund people like him who know well the wickedness of Zanu PF and will continue to support it. Which Zimbabwe is horrified and why, is speaking the truth about Zimbabwe equated to vilification? Is this creating a narrative to support Zanu PF or the learned Dr is beginning to believe his own propaganda. Yaa, that’s what happens if you repeat lies too long you will begin to believe them yourself.

Zanu PF is known for splashing cars and money to people in order to get them to support them. POLAD opposition leaders, clergy, comedians and reporters were given cars and some cash because Zanu PF came to a realisation that everyone has a price tag.

WELL not everyone has a price tag. Is it surprising to see someone travel to a demonstration at their own cost because they believe in the cause? It is very insulting to every Zimbabwean who will fund their own cause to have you generalise that every MDC A supporter or human rights activist has to be paid to do a bidding for John Burke.

We are all volunteers, Dr Mavaza, no-one has been paid.

The reason that the demonstration was done at the Zimbabwean embassy was perhaps the demonstrators were saying Zimbabwe is unsafe because activists like Hopewell, Mako, Joanna, Cecilia, Netsai and others have been incarcerated for exposing the truth. The likes of Itai Dzamara and others are still missing for simply speaking out, Tonderai Ndira you knifed to death. There has been no commission of enquiry set up for the 1980s Matabeleland massacres, there are no answers for the many who were maimed during and after the 2003 and 2008 elections. Don’t ever dupe yourself and think that the Ndebele people have forgotten, they are equal Zimbabweans deserving equal treatment like any other Zimbabweans. Villagers continue to be displaced for the benefit of political gurus so why should there be no demonstrations at the Zimbabwean embassy in London to say these things.

Dr Mavaza claims that the Zimbabwean Embassy offered non-judgemental support and practical support to the families, well how they did that is not clear. What is clear as quoted from Zim Eye is that 4 individuals were singled out by Mr Katsande as he refused to sign their Emergency Travel Documents [ETD’s are signed at the Embassy – perhaps that’s why we were there?]. So much for impartiality. While Zimbabwe makes no judgements regarding the deportations, Mr Katsande can single out which travel documents to sign and which ones not to sign. So, by inference from your statement Dr, Mr Katsande represents ED Mnangagwa [ED] meaning that it is ED who decided to single out 4 people and stop their deportation. That is the long hand of corruption from Harare right into 429 The Strand, London.

So people will continue to speak out as long as there is corruption that leaves nurses and teachers unpaid, as long as sewage continues to flow down streets and walls, as long as the hospitals continue to have no medication, people will continue to speak. As long as corruption is being peddled in the corridors of power through proxies like Kuda Tagwirei who has his boys shipping Rolls Royce on a cargo plane back to Zimbabwe on the back-drop of a total cost of USD770 000.00. And of course, Zimbabweans should cower and stay in their homes or if they do turn up, blame John Burke for funding demos. Shameful. Let’s deal with the speck in John Burke’s eye and leave the log in Zanu PF. Epic how the bible describes your writing Dr!!!!!!!

The activists are also lobbying for the adoption of a clear picture of Zimbabwe, not the sugar coated Zanu PF political rhetoric.

One only has to read the assessments by Amnesty International, United Nations, the US embassy in Harare [Quoted and referenced above] and all the reports in the UK media to understand how sickening the situation in Zimbabwe is. And of course, Zimbabweans that have something to offer in the UK should be considered for leave. Why does Zanu PF crave people to be in Zimbabwe, yet they do not even have a single state hospital that is adequately funded nor are they paying doctors and nurses a living wage.

No one demonstrating against Zanu PF is a paid mercenary. Since the Dr knows how that works and he himself is a paid mercenary he is aiding and abetting the destruction of Zimbabwe and Zimbabweans through 41 years of misrule and looting.

There is clear evidence that all Zimbabwe’s woes are inflicted by the Zanu PF cabal who laughingly call themselves a government and the Dr, is an apologist for the joke government. ROHR, ZHRO, MDCA, ZAPU and other activists cannot “soil Zanu PF”, it has done that on its own with the assistance of their crude use of violence, corruption, intolerance and continued rigging of the elections.

Why is it so difficult for the government of Zimbabwe to pay nurses and teachers a living wage when their ministers can afford to be airlifted out of the country for medical treatment? Why are the roads and infrastructure a total disaster while state of the art cars are bought for the clergy, comedians and political puppets?

So is the Dr oblivious to all this or he is pretending to be ignorant in order to push a narrative.

Lastly MDCA did not aid rapists and murderers but as always, they advocated for everyone to get due process. As you stated that those that wanted their cases heard should appeal to the British Government through the courts, that’s due process. So we really wonder what you are on about, except a failed attempt to create a political narrative and advance Zanu PF propaganda. That is what activists lobbied for. So it’s simple, everyone is entitled to due process something that is alien to Zanu PF and its enablers like the Dr, who believe everyone opposing Zanu PF should be frog marched to ‘shamhu ine munyu’ without any due process.

By the way, it was also the same group [organised by MDCA, ZAPU, ROHR and ZHRO] that were also there [at the Zimbabwe Embassy] on the 19th July 2021 – and their subsequent protests outside the Home Office [and handed over a petition document], Protests were carried out on the same day at Parliament Square, and finally outside 10 Downing Street, where our speeches were piped into Parliament to assist with the debate on all asylum seekers being conducted [https://hansard.parliament.uk/commons/2021-07-19/debates/C87C5848-DF11-4B03-90FE-39FA245CB12D/AmnestyForUndocumentedMigrants

Signed on behalf of the many true Zimbabweans in the diaspora.

With the support in our objectives from:

19.   Black and Asian Lawyers for Justice

37.   Joint Council for the Welfare of Immigrants

Plus many other groups for the 'Indefinite Leave To Remain' for people who are undocumented, destitute, and those in the legal process #HealthAndSafetyForAll