ED Mnangagwa was invited for COP26 visit but did not fully comprehend the purpose of the meeting and faced world-wide resentment due to his gross human rights violations against the people of Zimbabwe.

It was hypocrisy to address world leaders on climate change when he flew in a private jet. ED’s delegation comprised church leaders and opportunists who had no business there. The President of Zambia Hichilema flew economy with a delegation of two people playing his part in saving the planet.  ED also feared the Air Zimbabwe plane would have been confiscated by debt collectors on arrival.


The Summit was a flop as he addressed an empty hall as nobody was interested in listening to what he had to say. ED did not receive any financial grants to use renewable energy like other African countries. The only fruitful meeting he had with the EU delegation was affirmation that availability of support to Zimbabwe was subject to reforms on human rights violations. Ed was confined to his hotel room and summit parameters despite it being his first visit to Europe in over 25 years and is on individual targeted sanctions. 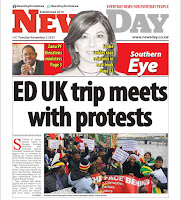 Scotland demonstration was very peaceful as we were protected by huge friendly Police presence. The demonstration received massive coverage on social media, television and local newspapers. We alerted the whole world about the human rights violations, abductions and torture under ED Mnangagwa leadership.

ED Mnangagwa has failed to provide necessities, like clean water and sanitation services for the people of Zimbabwe thereby has no contribution at the Climate Change Summit. You must pick up the litter first before you discuss recycling and the Capital City if filthy with piles of rubbish everywhere and running sewage in the streets.

The Government tried to infiltrate our demonstration by sending people like Masimba Mavaza a 'controversial' immigration lawyer who allegedly defrauded Zimbabweans of hundreds of thousands £ of the hard-earned cash.

He is a clown Zanu P.F fanatic supporter and 'planted' rogue Central Intelligence Officer [CIO] playing politics for the belly at the expense of the people of Zimbabwe suffering under the regime. He targets human rights activists and opposition to silence those speaking against the regime.

He invaded our protest on a false pretext of freedom to demonstrate; a human right denied to the people of Zimbabwe by the regime he supports.

The Police denied him to protest among us because of our clashing opinions and the Police 'assisted' him with a walk of shame miles away out of sight.

The following day he staged his unsuccessful demo with 4 people as nobody supports his cause and was only covered in the local state-controlled newspaper any normal person would never read.

He was so hurt that he penned an article based on a false narrative, full of hate, green lies, bitterness and a fruitless attempt to derail human rights advocacy. It’s a shame the state has its mouthpiece and puppets as no qualified objective journalists would ever publish such vile narrative.

The regime tried damage limitation after a successful demonstration against Ed Mnangagwa COP26 visit by a failed welcome ceremony.

The regime offered attendees 2US$, free meal and transport which is the reason they attended; as an average person survives on less than US$5:50 a day so they are coerced.

The President's public address was embarrassing as he lied to the people of Zimbabwe by playing the bigger man and how U.S.A President and U.K President was keen to re-engage with his government. He published in the local paper the general photos World Leaders pose together to emphasize global unity as a testimony of his engagement in private dialogue one on one with powerful heads.

The Government can spew all types of propaganda, send Pastors to lobby or blame its failures on
sanctions, but until it reforms Zanu PF will always be an outcast. The E.U delegation reiterated the same message to ED Mnangagwa that support is only available if he reforms. Our demonstration was a success and in agreement with the rest of the world.