I am appalled by the public humiliation of Mary Chiwenga over a domestic matter. The allegations begun in 2019 after there was a rumour, she was divorcing Vice President Constantino Chiwenga. She was arrested on charges of money laundering, disconnecting medical equipment attached to Vice President, fraud and violating exchange control regulations charges she denied. She was a scapegoat to Emmerson Mnangagwa pledge to eradicate corruption.
https://www.aljazeera.com/news/2019/12/15/zimbabwe-arrests-vice-presidents-wife-over-fraud-allegations

Mary was further arrested in 2020 over alleged assault of family maid, Delight Munyoro following an altercation over children's custody at Hellenics School in Borrowdale. She was barred from accessing her children. Mary Chiwenga won her High Court appeal for custody of the couple's three minors and access to their matrimonial home, but VP Chiwenga filed a notice of appeal at the Supreme Court so that his case can be dealt with urgency.
https://allafrica.com/stories/202001300920.html

Mary was dragged to court in 2020 on a stretcher bed. She had her passport surrendered to the courts denying her access to medical equipment while the Vice President flies private jet abroad for check-ups. Mary’s arm bore lesions and were severely swollen, could barely raise her head.
https://www.news24.com/news24/africa/news/zimbabwe-vps-estranged-wife-goes-to-court-on-stretcher-bed-due-to-critical-illness-20201130

Mary made a heartfelt address stating how the Vice President had hired hitman and that he is after her blood in court. She appealed to the public for assistance stating among reasons she was being denied access to her children and being denied access to her bank accounts. She stated how she was tormented and harassed by people continuously following her, her cars bugged, her parents being followed and anyone assisting her was beaten up. She accused the Vice President of using opioids and Vice Health Minister making them unfit for office.
https://www.newzimbabwe.com/marry-mubaiwa-claims-ex-hubby-chiwenga-hired-hitman-to-kill-her/

Mary was further remanded in prison without trial in 2021 as it took more that 15 months for the state to close its matter. Mary was arrested before a full investigation had been completed. The case highlights how judiciary and executive are inter-twined there by absents of rule of law. Mary was denied access to health care a basic human right. Mubaiwa is worried with her bail conditions to surrender her passport which have resulted in her failing to travel to South Africa. She needs urgent treatment after she was diagnosed with severe lymphoedema which has caused gross swelling of both hands and feet” and “large open wounds on both arms with some degree of granulation.
https://nehandaradio.com/2021/04/27/pre-investigation-arrests-15-months-on-state-not-ready-for-mary-chiwenga-trial/

Lazini Ncube at the Harare Magistrate court detained Mary for 10 days awaiting medical examinations by two medical doctors. The High suspended the decision calling it, capricious” and “arbitrary”. This just shows the conflict of interest between the rule of law and Executive influenced decisions.
https://www.facebook.com/zimbolivetv/posts/3143628305912358 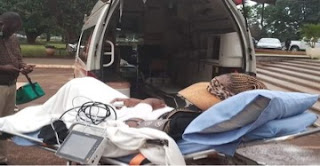 https://www.herald.co.zw/marry-mubaiwa-remanded-in-custody-3/
I am upset how this has been accepted as normal and gone unchallenged. The Zimbabwean feminists have been quite about it and failed to stand up for Mary. Linda Masarira leader of the Lead opposition party had the audacity to come out in public saying Mary Chiwenga deserved what she got. The lack of empathy and compassion is worrying as a woman. If Mary has done wrong, she deserves to be dealt with in court without the influence of the Vice President as a weapon to make her suffer.
https://www.newzimbabwe.com/marry-chiwenga-deserves-what-she-is-getting-linda-masarira/