ED Mnangagwa [illegal] President of Zimbabwe, had no business in Glasgow given his gross human rights violation record. Thus he faced mass demonstration because of his failed governance. 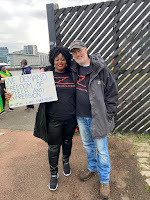 It within our constitution preamble that the Government should provide Good Governance, but Zimbabwe is marred with high levels of corruption under his leadership. The Drax case involves the first family and led to the arrest of the Health Minister Obadiah Moyo for misuse of COVID19 funds.

There is no separation between judiciary and executive leading to catch and release culture as witnessed by Obadiah Moyo walking scot free, despite compelling evidence and over $US2M confiscated by Interpol sitting in an offshore bank account in Hungary.

The 2nd Republic regime has captured judiciary and weaponizes it against opposition, human rights activists but protects Zanu PF elites.

Henrietta Rushwaya was caught with 6.9kg’s of gold and released without charge due to lacking of evidence as the CCTV was turned off. Interestingly enough this smugging charge was mentioned in the House of Lords [29th October 2021] - however the UK Government [FCDO and British Embassy in Harare] said that they were "unaware" of this serious breach!

The enforcement agencies are complicit in protecting the powerful Zanu PF circle under ED Mnangagwa leadership. Garudzo Ziyadhuma was the State Prosecutor in both cases arising suspicion if he is fit for office or enabling criminals to walk free.

The Auditor general Milred Shiri sighted concerns on how tenders were issued to fraudulent companies with none supply of goods or fake invoices in her 2021 report.

She came short to naming and shaming as the companies were directly or indirectly linked to Government officials. ED Mnangagwa promised to eradicate corruption on his New Dispensation pledges but it is rampant.